If only Carlsberg did MacNabs……..

The key to success with the MacNab is undoubtedly preparation and perseverance. On this attempt I was determined to make sure I completed the original declared list. I had decided on Roe Buck, pigeon, and dace. Roe buck as it is the rut and so I felt that I could call one fairly easily, but Dad and I already knew of a suitable animal as part of our management plan on Todenham Manor Farm. Pigeon as there is lots around at the moment and with the barley having been harvested at Todenham I had the option of decoying if I had time in the middle of the day. The dace was picked because I felt confident that I could extract one from Knee Brook that runs through the farm. The location was another factor in the choices, the idea of doing the whole MacNab within a square kilometre was very appealing too as an additional challenge.

I set out the evening before to check the roe buck was still in the area Dad and I had seen him previously, but also to check the river was in good condition to fish.

I got to the spot where I had last seen the roe buck, it was the work of minutes with the binos to find the buck and a doe sunning themselves at the base of a hedge. Leaving them to the sun I crept away to check the river. As suspected, it was in 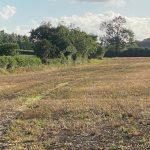 lovely condition, a nice flow with a tinge of colour, MacNab on! 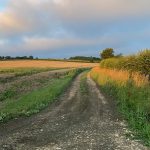 I was up and ready to go early, the truck had been packed the night before so all I needed was the shotgun, rifle, and ammunition from the safe and Alf the dog.

I arrived at the location after first light as I didn’t want to spook anything with the lights of the truck. I drove down the track and parked as quietly as I could having first glassed the first field as I poked the nose of the truck through the gate. I was glad to see nothing as it meant they were more likely to be in the next stubble field, where I could approach them without being seen.

Parking as quietly as I could I loaded the rifle and put the shooting sticks within reach. Looking up the other side of the hedge and about 30 yards further away than the night before, I saw the buck and the doe grazing on the stubble. I could feel my chest tighten; this was exactly how I had planned it! As I watched them the buck started to do what bucks do in the rut and chased the doe into the middle of the field. That was not in the plan and I wondered if my chance had just run off with them.

Knowing there was a gap in the hedge in the area that they had been lying the night before and hoping they would return to the area, I stalked quietly up the other side of the hedge. As I arrived at the gap I used the binoculars to look for the loved up pair of roe, but could see nothing and assumed they had carried on moving across the field.

Fearing the worst, I decided to wait for 10 minutes to see what might happen. As I was putting the rifle on the sticks the doe appeared from stage right and walked straight across in front of me at 40 yards! I froze and didn’t move a muscle, the wind was in my favour and she might just walk on……wrong! She spun round and looked straight at me but couldn’t seem to decide if I was a threat or not. After a minute or so she was still unsure but barked and ran about 30 yards. At this point I was sure the chance had gone, but the buck now entered stage left too, ran 30 yards after the doe and stopped side on at about 60 yards! Shifting the rifle left on the sticks, the hand loaded 6.5 Creedmoor was soon on it’s way and the buck dropped on the spot, phase 1 complete in 47 minutes! 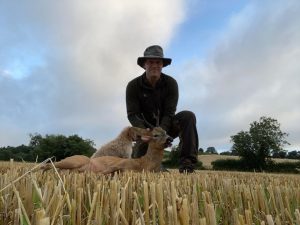 I dropped the carcass at the chiller and rushed back to the river to see if I could catch the dace and get the decoy’s out for the pigeons. I had changed dogs from Alf to Moss in anticipation of the pigeons.   Unfortunately, the cows had other ideas and they met me at the gateway to the field where the brook was! 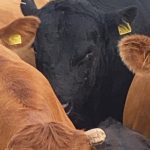 With calves and a bull in the field I didn’t think that taking the dog in there was a good idea so decided to take him back home. Not wanting to waste time I thought I’d have a quick walk around the wood next to the river. I grabbed the shotgun and headed for the long thin wood. Several groups of pigeon had flown out across the lane as I drove down so I wondered if it a few might come out as I walked. Only one came out the first side, but it was too low to shoot at. As I wondered onto the track two exploded out and straight away fr

om me. The two shots rang out and both dropped further along the track. Moss made a great job of the first retrieve but struggled a little with the second but picked in the end. Phase 2 complete and it was only just gone 9!

Having taken Moss back home, I eased past the cows and down to the river. I knew from the night before which swim I was going to fish and eased down the bank into position. The humble maggot was the bait of choice and I flicked a few into the flow for a few minutes before casting my feeder into position. As it settled the quiver rattled, always a good sign! Within 30 seconds it bent round and I was in to what I thought was chub. As it got closer to the net I realised that the first bite had been from the dace I wanted and the MacNab was complete! I couldn’t believe how well the morning had gone, many of the Rough Rovers following on WhatsApp has either woken up as I was on the fin phase or after I had finished! 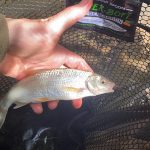 The MacNab was complete and all within a square kilometre and in five hours! Three shots and one bite later. If Carlsberg did MacNabs……………….