We had a memorable trip to the North Yorkshire Moors last Monday for my first day of the season and one of our number’s first time shooting grouse.  We have visited the same shoot, hosted by the same charming, unforgiving, sarcastic three Keepers for the last four years and are always guaranteed plenty of opportunities although our shooting has on occasion left a bit to be desired.  It is not that easy to find decent, reliable grouse shooting these days so we are blessed to have our foot in the door and hopefully we shall continue to be offered days here.

We arrived at the Head Keeper’s just after 9am and after consulting several online internet weather prediction sites concluded that it was going to be a pretty wet and windy day out on the Moors.  It may have been quicker to simply stand out in the yard and look at the view.  We were assured by the Keepers that today would be a picnic compared to the previous Friday where they had been drenched throughout the day, with a few of the guns having to bail out their grouse butts.  After a cup of tea and all three Keepers separately reminding us of the hilarious time I forgot my gun (another story) we set off through a large area of forestry to the moor where we were to spend the morning. We lined out through the managed heather that was thankfully only knee height at it’s deepest and immediately saw birds getting up albeit a long way out.  The piece we walked had only been shot four times but it was enough to make the grouse flighty plus in the cooler weather they are less inclined to sit tight. 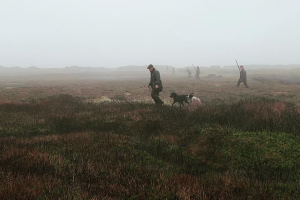 However, it did not take long for our novice to the Moors, Richard Olliver, out on the left wing, to bag both his first ever Grouse and The Rough Rovers first of the season.  A bird got up about 20 yards straight in front of him and although he missed with the first barrel the second was lethal, which was just as well as the Head Keeper was standing extremely close. Ed Ryle on the right wing could be heard getting some early target practice with some long range shots but sadly was not yet troubling the scorers. Tony Walsh, to my left, was next to get an opportunity which he did not waste bringing down a good 30 yard crossing bird with clinical precision. From then on the majority of the action was out on the right as half the line dropped down a steep bank below. Ruthless and seasoned grouse shot Alastair McCance was quickly into the action along with Mark Chadwick on the inside.  The birds were still lifting a good way out but with Ed Ryle now finding his true form all three of them were making the most of the challenging opportunities they got.  Rather frustratingly we could see several large coveys lifting a long way out and settling back in to the heather a good 750 yards away.  Having missed a few long range birds my first relatively easy grouse got up about 15 yards in front and to my left I missed.  Walsh obligingly wiped my eye and brought it down at about 35 yards.  My moment finally game with another bird out in front swiftly followed by another that came straight at me and was brought down behind.  The Keepers then decided that it would be more productive to try and drive the birds towards us and this proved more successful with Walsh, McCance and Ryle getting the shooting.  The second drive I finally got my turn in the hot seat as I knelt below a shallow bank a covey of grouse split either side of me and I expertly dispatched a left and then a right although when I went to collect the right it got up and flew away only slightly dazed.

We stopped for a brief lunch back at the Lodge keen to carry on shooting before the weather deteriorated any further.  We set off for a short drive to a moor behind the Lodge where an ever thickening fog was setting in.  We only had five brace to shoot to reach our target for the day and the shooting was spread pretty evenly along the line although my own poor performance continued missing a few and eventually getting a few.  Tony ‘The Grousassin’ Walsh continued with his excellent form shooting birds 40 yards out as if they were the size of an ostrich. We finished the day just shy of the bag but it was a truly memorable day and in the true spirit of a walked up day we all had to work very hard hunting the most exciting of wild game birds. 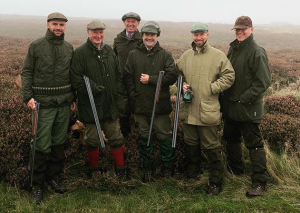