I am delighted to report that Simon F. was the first one to complete The Rough Rovers MacNab Challenge (RRMC) last weekend.  As the rules stipulate any attempt must be registered with the panel prior to commencement.  In this case the target species for the day were:

Sadly Simon did not manage to complete his intended quarry list but through perserverance and determination he did manage the Fur, Feather and Fin in a single 24 hour period.  His total score for the attempt is 1275 points.  He has very kindly written up a summary of his day and is very keen to give it another go.  The Rough Rovers MacNab Challenge is open to all Members and should you wish to give it a go there is a set of Rules and Regulations available to guide you through any attempt.  Each season we aim to have a RRMC dinner to which all those registering an attempt, whether successful or not, will be invited and a winner for the season declared. 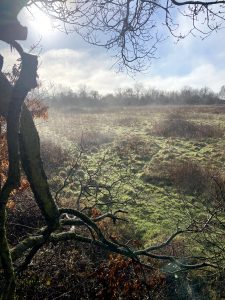 Jono arrived at 6.30 on the dot as expected. The destination for us both, in separate vehicles was a permission near Shipston-on-Stour that we thought was my best chance of fallow. The conditions were not ideal as the morning was very foggy.

The plan was for me to sit in one of our high seats and Jono to have a walk around to move any fallow on the land. The question was would there be any about and would I see them through the fog if they did come past me!

Jono reported seeing a few as he moved round but nothing came anywhere near my seat. Refusing to be beaten and with the words from Phil M on the WhatApp group ringing in my head ‘Got to be creative and pro active for a RR MacNab’, I moved to another seat where I hoped the sun would hit first and something may be tempted to come out into the open to warm up. The fog lifted, the sun came up and warmed up the morning.  Whilst watching a group of fallow on the top of some rough ground, a sudden movement caught my eye to the right of a large gorse clump; it was a fox was out enjoying the sun. I don’t normally shoot foxes, but the landowner desperately wanted to keep on top of the numbers as they were causing a problems in the farmyard, plus this one was limping badly on it’s rear legs, so the decision  an easy one and the fox was dispatched. The fallow decided that the sun wasn’t worth the risk at that point! With the fur phase complete I hurried back to the truck to move to the fin phase of the challenge! 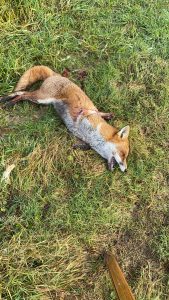 I had diligently watched the levels on the River Stour for the last week given all the rain we had been having. It had been up and down for the last few days but today still high, though definitely fining down and very coloured. I only had one option for the fin as it was the only access I had within close to home. The local duck pond really didn’t seem to fit into the MacNab ethos! I crossed over a large grassed field to my permission and the first sight of the river just holding within its banks didn’t fill me with confidence!

I arrived at the stretch I planned to fish and the obvious bait in the conditions was the humble worm. I’d knew this part of the river well before but had never seriously fished it. A  lovely crease on the inside of a bend complete wit

h over hanging bushes on both sides seemed the ideal place to catch my intended target – the mighty chub. The lobworm was placed in the swim against the far bushes and a few free offerings dropped into the slack water. Nothing happened for about 30 minutes and I was thinking about moving to a new swim. Moss, the Golden Retriever was definitely bored! Then, out of the blue the quiver tip almost shivered, in a way it hadn’t for the last half an hour. I wasn’t sure it wasn’t just some debris brushing the line, but somehow years of fishing told me it wasn’t. I was now on full alert, Moss was still bored. The tip moved again and then a little further, I struck and the fish was on. It wasn’t big but it was a fish and with thoughts already turning to the feather phase it came off! Gutted! What if I didn’t get another chance? I quickly recast and settled in to wait again. Ten minutes later the same slight movement followed by the tip pulling round resulted in another fish on. To be honest it was an uneventful fight but the fin section was complete.  It wasn’t the chub I was hoping for but a good sized dace. I did continue chasing the chub for a while but the Rough Rovers McNab WhatsApp group urged me to now focus on the brace of pigeons I needed to complete the challenge. 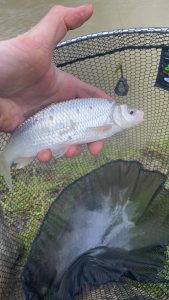 The wood where I planned to roost shoot the wood pigeons was about 150 metres from the river; so after a quick cup of coffee I headed up there. Moss was now also on full alert and I think he could feel the pressure building in his normally level headed partner! The wood was a perfect place for pigeons to roost, open areas for the pigeons to happily land and fir trees to spend the night protected from the cold.

As I walked to the top of the wood I was really hoping for a quick start. I’d shot the wood about two years ago and was feeling confident that I’d get a few opportunities. I was hoping for some roosting shots as they came into the trees, but as I got to the top of the wood a single pigeon was flying across the field at about 40 yards. It was a shot to nothing and to my surprise it folded and dropped in the middle of field! Once Moss recovered from the shock he flew out and recovered what I hoped would be the first of two.

Now I was nervous, I remembered that Phil had fallen short of the challenge by one pigeon back in Lock Down One and didn’t want to be the second to fall short when so close. The support coming in from the other Rough Rovers was great but also seemed to increase my desperation to achieve the challenge.

With the first of the brace achieved within 2 minutes and 3 hours of daylight remaining, surely it was going to be easy now, wasn’t it? The pigeons had other intentions and not a single bird came near the wood for the next twenty minutes, but I could see lots landing in the wood on the other side of the field!

As one always does I now started to fidget, as pressure started to build.  Suddenly a flash of grey caught my eye and a  wood a pigeon came over the top of the firs and swung into the wind to land on the edge of the wood. The Perazzi came to the shoulder and the shot was on it’s way before I could blink and the pigeon plumetted towards the grass, out of sight of me in the wood. I was inside a pheasant pen and had to work my way to the top of the wood to access into the field where I could send Moss, who had now sensed my excitement. We got to the top of the wood and about 50 yards away I could see a grey shape on the grass. Moss was out and back in his usual enthusiastic way and it was mission accomplished! I was elated and the words of congratulations that were forthcoming from the rest of the Rough Rovers reminded me why it is a great organisation of like minded people! Being the first to achieve this in the Rough Rovers meant so much more to me than I realised until I’d done it. All done in time to get back and watch the rugby………..but that’s another story! 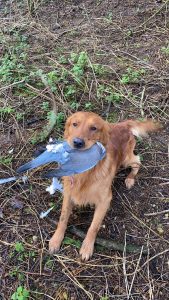 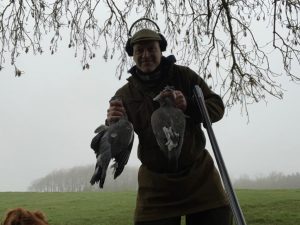