Dear All, I have had many requests from Members wanted to know who won what at the AGM so I have listed them below.  It was a very successful evening with a turnout of 32 and we managed to pack ourselves into the tiny room at The Woolpack and enjoyed a terrific three course meal conjured up by Chef Adam Glover.  Everyone behaved themselves and the speech seemed to go down pretty well too with only moderate heckling.

A big thank you to everyone who shot with us last year, it was a great season.  The Invitations are out for next season which you should have all received so do please respond as soon as you are able as it helps me plan the calendar.

The Photography Award was decided by five independent judges with no set criteria given to them.  The three who made it to the shortlist were Ian Cooke, Liam Grady and Mark Smith.  The fact that the winner was actually “IN”  the photo they submitted seems to have passed the judges by.  The winner was Ian Cooke with a photo of A Rough Rovers Team up on Bingley Moor last August.

The other photographs submitted are in the gallery (instagram)

The Grouse Cup was controversially awarded to someone who was unable to make the AGM.  However, the fact that the winner managed to shoot two brace of grouse with only three cartridges set him aside from the other contenders.  He shot the first brace well out in front, leaving enough time to reload one barrel and shoot at the same covey behind, hitting his second brace.  Plus his dog retrieved the last bird!  Norman Onens was the worthy recipient of the trophy.

Best Dog and Owner.  The winner of this Award was a very popular choice with the now very rowdy crowd at the AGM.  We did not have our usual numbers of dogs out in the field this season. However, Murphy, Jaeger and Herb did get a special mention.  I was tempted to give the prize to one of my terriers but I think I would have been torn apart by the hordes.  The winner was Mark Robson’s dog Major who was long overdue for the title having an enthusiastic and integral part of so many Rough Rovers Days. 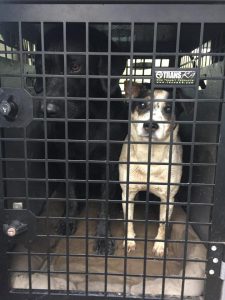 (Major’s the one on the right)

The Field Culinary Award was fiercely competitive this year mainly due to the efforts of Chris Marney last season who excelled in his first season with the Rough Rovers.  After a fantastic start though pressures of work and family kept him out of the field and tragically out of the competition.  Needless to say spotting the title was up for grabs there was a surge in new chefs taking to the field.  There were strong entries from Ben Mulholland, Tom Benjamin, David Dovey-Walker, Mark Robson, Ian Cooke and Liam Grady.  To be frank everyone made a huge effort this year and imes the Elevenses or the Lunch seemed to be the focus of the day.  However, the shortlist came down to two Chefs – Liam Grady and Ian Cooke who had battled throughout the season with Grouse Liver Parfait, Duck Pate, Cured Duck, Venison Meatballs, Game terrine, Quiche – I could go on and on.  The Award finally went to Liam Grady who pinched it due to his cooking of hot food on a cold day.  Well deserved. 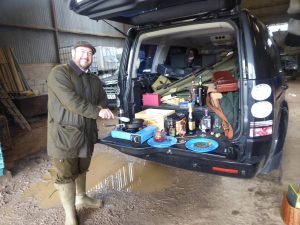 The Woodcock Cup, perhaps the most coveted Award for the serious shooter that is in all of us somewhere hinged really on the January trip to Anglesey.  With not many being shot this season it would be the one opportunity to find a clear winner.  After two days of shooting there were two real contenders and as one of them won the trophy last year it was a no brainer.  the winner was Tom Benjamin who actually claims that the first game bird he ever shot aged 12 was a Woodcock – good pedigree.

Rough Rovers Of The Season.  Definitely the peoples Award and not an easy one to take home.  This one went to someone who has been a Member since we started but does not shoot that many days.  He enjoys the day whether beating, picking up, loading or shooting and is truly happiest when out with his daughter and their dogs.  The winner was Mark Smith.